A third pointer to the Southern Cross

For Australians and New Zealanders, the Southern Cross is an icon of identity.  The stars of the cross adorn our flags, and the constellation, together with its two bright pointers, has hung always visible in our southern skies. It has been a constant and unchanging beacon to indigenous peoples, to European explorers, and to all modern Australasians.

For a few nights only, there is a third pointer to the Southern Cross.  A new quite bright star has appeared very close to Beta Centauri, the topmost of the two pointers, effectively creating a third pointer to the Southern Cross.    This star is what is known as a “nova” (from the Latin for “new”).  In fact, an existing star – a very faint and hitherto undistinguished star invisible in any but powerful professional telescopes – has, over a period of mere hours, brightened spectacularly.  Last night, it was 25,000 times brighter than it was on Monday, and it’s still getting brighter. 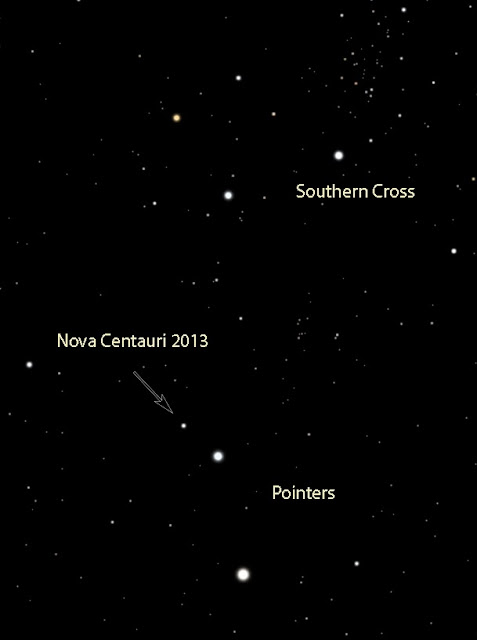 The nova was discovered in the early hours of Tuesday morning by John Seach, an amateur astronomer from Chatsworth Island in NSW.  John regularly scans the skies for novae and supernovae, using a nothing more elaborate than a DSLR camera with a wide-angle lens.  He already has several discoveries to his name.  On Tuesday morning, it was still only barely visible to the naked eye, but 24 hours later near dawn on Wednesday it had become as visible as in the image above.

The study of novae is extremely important to astronomers.  A lot of the physics that underpins the formation, evolution and behaviour of star happens at such colossal temperatures and gravitational forces that they cannot possibly be duplicated in a laboratory.  Therefore, a lot of stellar physics is theoretical.  However, when a nova erupts, astronomers get a chance to watch the physics at work inside stars in real time.  Therefore, they closely monitor the emissions from stars in nova – visible light at all wavelengths, X-rays, infra-red – to build up a picture of what is occurring within.

In fact, stars that “go nova” are part of a binary system – two stars in close orbit around each other.  One of the pair is a normal star, much like our sun; or perhaps a bit larger and redder.  The other is what is known as a “white dwarf” star.  White dwarfs are extraordinarily small and dense – as much mass as our sun, packed into the size of a planet.  At these densities, matter becomes “electron degenerate” – the electrons become stripped from their nuclei, which float together in an ultra-dense soup.  One teaspoon of degenerate matter has a mass of several tonnes.  These two stars whirl around each other in an orbit that takes mere hours. 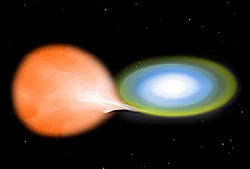 In nova systems, the gravitational force of the white dwarf continually pulls matter (mostly hydrogen) away from the larger star.  This matter gradually spirals down onto the surface of the white dwarf, where it accretes, and is compressed and heated.  Pouring hydrogen onto the surface of a white dwarf star is a bit like pouring petrol on a barbecue - eventually a runaway nuclear fusion reaction starts in the accreted hydrogen, which explodes cataclysmically and blows the hydrogen and other accumulated gases out into space at thousands of kilometres per second.  By examining the spectra of novae in outburst, we can determine the chemical composition of the gases hurtling into space; the temperatures of the reactions occurring; and much else of scientific interest.  By measuring the Doppler shift of the spectrum, we can even determine how fast the gas is being blasted into space.  So in a real sense, novae are astronomers’’ practical laboratories for observing stellar physics in action.

If it behaves as a typical nova, Nova Centauri 2013 might continue to brighten for another day or (if we are lucky) several days, before beginning a similarly rapid fade back into obscurity over the following weeks and months.  At this time of year the Southern Cross and its pointers rise a decent distance above the horizon in the hours before dawn.  So if you want to grab a look at the third pointer to the Southern Cross you’ll have to get up early over the next few days.

Posted by Jonathan Powles at 12:01 AM