Here are four slightly random images that I'm posting simply because they are slightly quirky, and I am rather fond of them.  The first is the Eskimo Nebula, an example of a rather particular type of nebula called a "planetary nebula".  The name is a misnomer: these objects have nothing to do with planets.  They are the remains of stars much like our sun, that die not with a bang but a whimper.  Instead of the fate of larger stars, which end as novae or supernovae, massive explosions and/or collapse into neutron stars or black holes, smaller stars like the sun simply puff their mass out into space as a series of cosmological death-rattles.  These puffs form a sphere of gas that expands outwards from the star over thousands of years.  They appear as small coloured discs - easily mistaken for planets.  Hence the name.  This particular nebula, the "Eskimo", NGC2392, is a rich blue colour not unlike Neptune.  It's the first example of its type I have photographed. 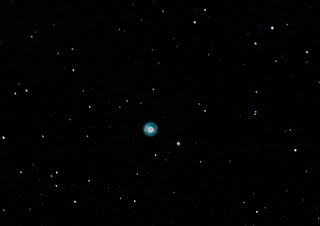 The next photo is f the Tarantula Nebula.  This is not strikingly exceptional as an emission and diffusion nebula - the (slightly colour enhanced) red elements are glowing hydrogen, while the blue/white sections are gas reflecting the bright light of internal stars.  The one really unusual aspect of this object is that it is outside our own galaxy, in the Large Magellanic Cloud.  It's actually a massive object, and if it were in our own galaxy - say, at the same distance as the Orion Nebula - it would take up half the sky and glow as bright as the moon. 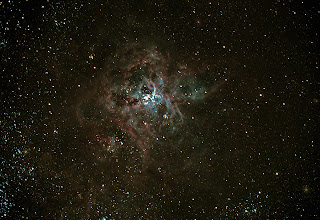 The next is an image of a real neighbour.  This is Jupiter with her four brightest moons.  Actually this is a composite of two images - no single exposure can capture the detail of the bright planet as well as the faint moons, so I had to do a bit of Photoshop jiggery-pokery. 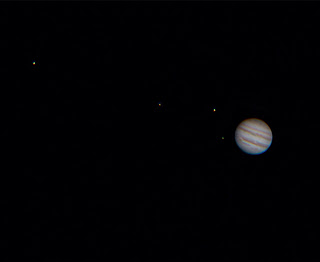 Finally, here is a fuzzy incomplete image of galaxy NGC1365 in Fornax.  For various reasons (clouds, trees, my own inexperience) I've only been able to collect 30 mins of total exposure time where it really needs about four times that much. The reason I'm posting it now is because last November a star in this galaxy (56 million light years away) went supernova.  It was quite bright last year, but is beginning to fade.  The star is still visible - it's the blue dot marked with the arrow.  The galaxy is starting to get too low in the Western sky to shoot properly - I'll image it again next year but by then the supernova will be gone. 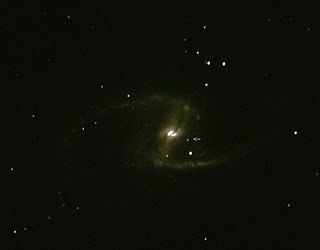 Posted by Jonathan Powles at 7:09 PM No comments:

Email ThisBlogThis!Share to TwitterShare to FacebookShare to Pinterest
Labels: Science

A matter of perspective ...

This is my favourite astrophoto yet. I took it last week- 16 exposures for a total f 90 minutes. It is Centaurus A, a large, quite close galaxy that has its unusual shape owing to the fact that it is currently in the process of swallowing a smaller spiral galaxy.  At its heart is a supermassive black hole with a mass 100 million times that of the sun.  That sort of size puts things in perspective. 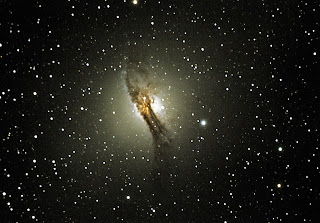 The other issue of perspective, and the reason I really like the photograph, is that you can easily see the foreground stars - the ones in our own galaxy.  The sense of distance is quite acute.

I say it's a close galaxy, but I'm speaking cosmologically. It's around 13 million light years away, meaning the photons which hit the sensor of my DSLR left Centaurus A and began their long journey to earth at pretty much the same time as this chap, a Sivapithecus, came down out of the trees and on to the African grasslands, and began the complex process of trial and error that led to the tool-use and then ultimately to the invention of the DSLR ... 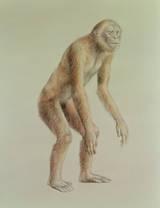 Posted by Jonathan Powles at 6:51 PM No comments:

Email ThisBlogThis!Share to TwitterShare to FacebookShare to Pinterest
Labels: Astrophotography

As a child in the 1970s, I loved astronomy and space. It wasn't until I was 20, in 1986, that I was able to get a telescope. If you were alive then, and at all interested in what might rain down from above, ;-) you will remember that 1986 was all about Halley Comet fever. So in April 1986 I finally got a telescope - a modest 5" Newtonian - and with my reference materials (a newspaper article on Halley, a planisphere, and a Patrick Moore book on astronomy that I'd had for years) pointed my new treasure eagerly at where Halley was supposed to be.

Amazing! The eyepiece was filled with a glorious shperical burst of light. I couldn't believe what I was seeing: 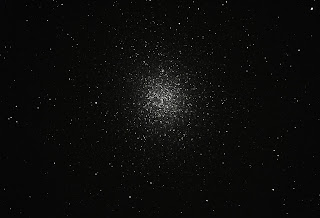 I looked harder at the image - interesting that the diffuse cometary halo semed to resolve into individual points of light ... And no sign of a tail, but then I had heard that this visit of Halley was disappointing. What I was seeing was anything but disappointing. But the longer I looked, the less it looked like what a comet was supposed to look like.

Well, eventually I realised that I was a few degrees off, and what I was looking at was Omega Centauri. Wonderful it was! I was looking for this comet, but was the sky really full of unexpected treasures? I started to slew the scope around (in those days, "slew" was something we did by hand) and came across something that literally took my breath away. There was a little pocket of gems in the sky that Aladdin had left behind. A sparkle of red, blue and green (I'm SURE I remmeber green!) stars in a tiny little treasure-chest just below the Southern Cross: 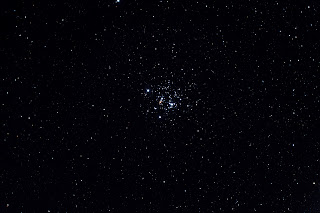 It was the Jewel Box, and it hooked my into the delights of the sky in a way that has lasted a lifetime.

So, nearly 30 years later, when I finally fulfilled a lifetime's ambition and acquired a new telescope and a camera, and after three months of technical bedding in during which I finally got autoguiding working, there was only one object I could possibly photograph. This little box of jewels. 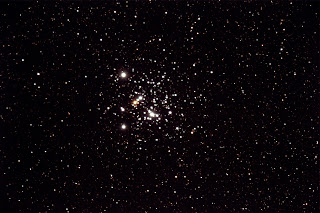 Meade 10" SCT, F/10, with a Canon EOS 60Da. Next time I'll go for it with my focal recucer to F/6.7, which will enhance the sense of this little treasure of gems secretly buried in the deep south of the sky.

Thanks for reading this far in the nostalgic musings of a lifetime star addict :-)
Posted by Jonathan Powles at 5:13 PM 1 comment: