Those of you following my tweets over recent months may have picked up that I have been running a course for first-year students in the ANU School of Music that has involved them responding in a variety of creative ways to the Canberra International Music Festival.  I asked the students' permission to share some of the outcomes publicly, and here they are.

The responses ranged from the creative through to the journalistic.  In the latter category were some newsletters produced by students, one focusing on the student experience of the festival, the other dealing with the audience experience of the venues, as did this report based on audience surveys.

Many groups embraced online media.  This tumblr about the Australian composer graham Koehne contains videos, compositions, reflections and photos of the students' experiences working with Koehne during the festival.

The Bachelor of Education students produced a fascinating project reflecting on the role of "conductor as educator", which they published as this blog.  Another group interviewed performers and composers, blogging the results here.

Another group put together a blog about Steve Reich's Deserts Music.

One powerful group project was this video made by a group of students about a concert of works focused around the Australian composer Frederick Septimus Kelly.  Kelly was a soldier in World War One, surviving Gallipoli only to die on the Somne.  He wrote two sonatas in the trenches, one unfinished. 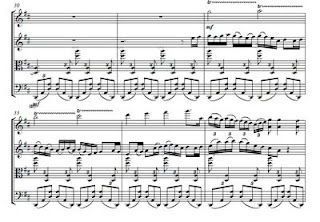 There were several extremely creative responses.  Students wrote compositions in response to the music they heard and played at the Festival, such as this work for string quartet.  Another group made a series of arrangements of the same music, reflecting their individual responses to the festival.

One of the most interesting responses, sadly too large to upload, was a video of an interview with a flute and guitar duet that performed on original early nineteenth-century instruments during the Festival.  The students - another duet - attempted to recreate the stylistic elements of the performance on modern instruments.

Drawing on the symbolic use of colour in the programming of the Festival, one group created artwork and improvised in response to the various colours and images, and discussed this on a video:


Colourisation from James Adler on Vimeo.
Posted by Jonathan Powles at 8:19 AM No comments: