On the ABC Drum, editor Jonathan Green posted a marvelous piece about the media coverage of the Christchurch earthquake - "The media is not here to help. It does not feel your pain"

I posted a comment, which I am reposting here in an expanded form.

There is a curious thing happening here: in the interest of "human interest", the actual humanity of the subjects the media reports is stripped away. The human dignity and respect; the families and relationships; the complexities of why, and how, and what it means for individuals to be caught up in these terrible events - these things are jettisoned so the media can easily and quickly project an uncomplicated, powerful, but ultimately superficial image. Get the bloody headshot on the front page, and bugger the consequences. Or the context, or the respect, or the sympathy.

Increasingly, the actors in these porn-films-masquerading-as-journalism are the media personalities themselves. It happened during Cyclone Yasi, where the focus most of the commercial television wasn't the cyclone and its impact, it was shots of Peter Overton standing in the cyclone. It happened during the flood coverage, with Peter Doherty turning himself into an image, the only reasonable story behind which had to be "Journalist Makes Himself Look Like a Goose". These were both covered deftly, and scathingly, by Jonathan Holmes on Mediawatch.

Worst, it happened in Egypt, where the world's commercial media seemed to queue up to report themselves reporting from Cairo. For a week a complex story unfolded: a story about history, the nature of political pressure from popular support, the values of the Egyptian military, the nature international reaction in the US and the Middle East, Mubarak's personal intransigence, and the unique cultural, post-colonial and political context informing Egypt's lengthy and difficult history of self-determination. This story was covered, in places brilliantly, by analysts, commentators, and writers around the world.

Few of them were in Egypt.

The commercial television journalists in Egypt were there, in truth, for one reason: to get the shots of bloody heads, corpses, and wailing women when the real fighting started. Thankfully, the Egyptian people and military displayed more sense than the hungry TV news editors, and catastrophic violence was largely avoided - except for that ludicrous cavalry charge that was staged by Mubarak's heavies, I can confidently assume, precisely because the world's media was there to report it. 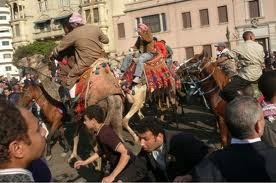 On ABC local radio just now there was an interview with a NZ Salvation Army major who is in Christchurch helping with the necessary counselling for shock, loss and grief. He is staying in a motor park, and talked of overhearing the occupants of the next-door cabin, a father and daughter. The daughter was asking when she could go home; the father was gently telling the child that their home was broken; then it caught fire; and now it is gone. They will not go home.

This is a story; and its a story that is being told hundreds of times across Christchurch.

Maybe we need more stories, and should grow up enough to read the ones that don't have pictures.

Posted by Jonathan Powles at 3:03 PM No comments: