Jamie's recipe for Braised five hour Lamb with wine, veg and all that from his book "The Return of the Naked Chef". I've cooked it: it's spectacular. Perhaps better for winter though. Posting it here just because food is part of the collection of things about which I wax lyrical.

This is a real hearty and trouble free dinner. There's barely any preparation, just a nice long cooking time which will reward you with the most tender meat and tasty sauce. Large legs of lamb are ideal for this dish as they benefit from slow cooking. If using a smaller leg of spring lamb then consider cooking for an hour less. Serves 6.

In a large pot or a deep sided roasting tray, fry your well seasoned lamb in a couple of good lugs of olive oil until brown on all sides. Add the bacon, onions and garlic and continue to fry for 3 more minutes, throw in your herbs and veg. Pour in your wine plus an equivalent amount of water, bring to the boil and tightly cover with kitchen foil. Bake in the preheated oven for 5 hours until tender, seasoning the cooking liquor to taste. To serve, pull away a nice portion of meat, take a selection of veg and serve with some crusty bread to mop up the gravy.
Posted by Jonathan Powles at 3:28 PM No comments:

Knowledge and Learning: Our Imaginary Friends

I have just now returned from giving a paper in part about the metaphorical narratives we use to describe education. Like my Implementing VC 2.0 talk, it depended in part on a body of theoretical, indeed epistemological concepts which the audience had neither the time nor the interest to engage with. I therefore glossed over them. But maybe it's worth jotting down a few ideas here.

Knowledge is an imaginary construct. It has no physical reality.

This is a fundamental fact over which we gloss so easily when we construct metaphors for education that involve pouring quantities of knowledge into the heads of students. Educationally-informed academics nowadays know to pay lip service to the idea that education conceived as the transmission of information from teacher to student is a Bad Thing. "Puts students in a passive role and contributes to student disengagement!" they chant. "Symptomatic of surface rather than deep learning" goes the hymn.

But how many realize that the notion that information is a commodity that can be transported from one head to another is simply an epistemological and semiotic impossibility? Knowledge doesn't exist. Or rather, it exists only in the same way as unicorns exist. Or Rudolph the Red-Nosed Reindeer.

There is a quantity of secondary textual evidence pointing, rather messily, ambiguously, and contingently, to certain possibilities ("The boiling point of water is 100 degrees Centigrade" is not in itself a fact, merely a reference to an imaginary "fact" seemingly simple, but easily messed about with. Just go up a mountain). There are real and observable behaviors which we take as evidence of "facts" (when I cook peppercorn sauce I put the brandy in before the cream as I "know" the boiling point of alcohol is lower than that of water. Actually, this is a huge leap of faith based on secondary texts and my repeated testing of the hypothesis, not knowledge at all). There is no "naked" fact: discrete, bounded, true.

If you think this sounds like a simplistic mish-mash of basic scientific method and undergraduate poststructuralism, you are right. It is elementary. So why on earth is it that so much educational theory and practice is predicated on the idea (or at least shorthand) that knowledge has an independent reification to the extent that it can be "generated" or "transferred"? Like electricity?

The misconception then infects our concept of "learning", if conceived as the acquisition of knowledge, the level and completeness of which acquisition can then be measured, validly and reliably, through assessment. But it's not that at all. Because knowledge isn't real, we can't measure it: instead we purport to use the proxy measures reflecting knowledge acquired (what the students say, write, think and do after having been 'educated'). But this misses the essential point that Dewey tried to tell us so long ago: what the students say, write, think and do is the learning: learning is the progress of the indissoluble transaction between "self", "society" and "world", all three of which are inseparable and labels for relationships of power and meaning, not things in and of themselves.

This is why I am instinctively drawn to online learning. The ability to more completely capture the "trace" of this transaction - debris of text, speech, images, music and whatever else that the learners leave as the process of learning unfolds is greater online than face to face.

This Christmas will be the first in which my seven-year-old son no longer believes in Santa. A beloved "fact" has bitten the dust. I can tell that by the trace, what he says and does. He no longer will lie in bed listening for bells and the sound of reindeer hooves, craning for a glimpse of Rudolph's growing nose.

Knowledge has been gained? No, in this case, lost: knowledge of a cheerful, unconditional magical gift-giver having been replaced by a complex, insecure, anxiety-filled understanding that what was previously a certainty is now contingent on (in his case) less-than-dependable parental relationships. Bittersweet, at best. Knowledge has proven to be an undependable entity.

But yes, Virginia, learning has occurred.

Posted by Jonathan Powles at 6:35 PM No comments:

A Tale of Two Releases

Two releases announced today have confirmed my bifurcated faith and despair in the times in which we live.  One was the release of Burmese opposition leader Aung San Suu Kyi after nearly two decades of house arrest.  The other was the release of Investing in Our Teachers, Investing in Our Economy, a report on school education from the Grattan Institute.   The report outlined evidence for the proposition that "“improving teacher effectiveness benefits our children. ... [but] ... the drive to reduce class sizes, whilst well intentioned and politically popular, is found to be without impact in producing better education outcomes for students."

These two releases might seem entirely unconnected.  Indeed, that is part of the problem.  What they throw into stark relief is the confusion that reigns in our public discourse about how we measure value.

In any quantitative terms, the impact of Suu Kyi's release is miniscule.  Nothing has changed in the Burmese regime; no material, constitutional or even spiritual benefit will flow to the Burmese people as a direct result of the release of a single individual.  She holds no office, has no authority, and her now being free to go about her work will make no appreciable impact on the Burmese GDP. But the symbolic power of the event - its capacity to touch hearts and minds, to shape attitudes and behaviours - is immense.  "The symbolic importance of Aung San Suu Kyi, the only prisoner of conscience in Burma who is a truly global figure, is not lost on anyone" wrote the Asian Human Rights Commission on Friday.  "Her captivity symbolizes the captivity of her country: the captivity of over 50 million others to the whims and dictates of army officers who have shown manifestly, time and again, that they hold office to serve only themselves and theirs."
This is a game-changing event.  Though it has no measurable outcomes, its value is literally inestimable.  I do not use this word as a cliched alternative for "very, very big", or as an excuse for poor economics.  I mean precisely that the release of Aung San Suu Kyi has an impact and significance in an area of human behaviour in which quanitative measurements, or estimates, are simply not relevant.  She stands as lightning rod for the energy of freedom, in Burma and in the wider world.  Lightning may strike next week, or next year, or never - it is impossible to predict - but her power as a symbolic catalyst for change is palpable. 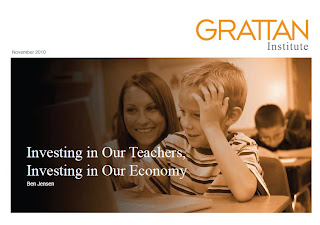 By contrast, to open and begin to read Investing in Our Teachers, Investing in Our Economy is like sliding into a bath of lukewarm jello.  It puts together a case carefully constructed from a number of existing studies and evidence (there is no new or original research).   It finds a correlation between educational outcomes of students, educational performance of teachers, and national economic benefit.  Seemingly there has been negligible benefit from reduction in class sizes. "Teacher effectiveness is the key: not class sizes. This is the best policy lever for improving schooling for students and giving parents what they want. It will provide more bang for our education buck."

And here is where I am tempted to despair.  I have no quibble with the research methodology: the report measures what can be measured, quite well.  But it ignores what cannot be measured, and this is its problem.  There is a myriad of statistics proving that "a 10% increase in teacher effectiveness would improve test scores by 19 PISA points and put Australia amongst the best performing education systems in the world" or that "the impact of a one standard deviation increase in test scores [would be] GDP growth between 0.8%-1.2%".

But amid the statictics, I looked in vain for a description of any sort of "teacher effectiveness" I recognised.
Where were the effective (and beloved) teachers of my childhood?

If I want aspirations, thank you very much, I'd prefer the symbol of Aung San Suu Ky.  Or my high school teacher Mrs Moulton, who taught me that, with enough courage, effort and compassion, the boy I was could actually become the man I dreamed to be.

Investing in Our Teachers, Investing in Our Economy measures what can be measured: numeracy and litercy scores. Like the MySchools website, it is silent on the rest: on values, community, role models, symbols.  These things can't be tested, and can't be quantified.  But they are important.  Immeasurably important.

In classrooms across the country, every school day, teachers are teaching our children maths and reading.  But they are also teaching them how to cooperate, how to value the things our society values, how to lead full and happy and profitable lives.  Very often they teach these qualities not by lecturing on the topic, but simply by being the sort of people our children can admire, respect, and aspire to be like.